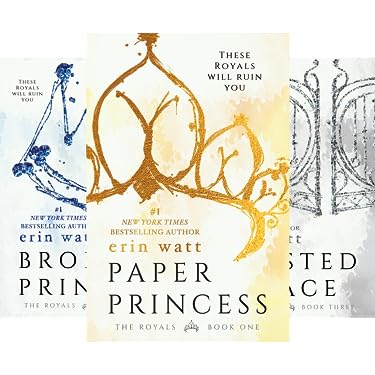 Goodreads Synopsis for Paper Princess: From strip clubs and truck stops to southern coast mansions and prep schools, one girl tries to stay true to herself.

These Royals will ruin you…

Ella Harper is a survivor—a pragmatic optimist. She’s spent her whole life moving from town to town with her flighty mother, struggling to make ends meet and believing that someday she’ll climb out of the gutter. After her mother’s death, Ella is truly alone.

Until Callum Royal appears, plucking Ella out of poverty and tossing her into his posh mansion among his five sons who all hate her. Each Royal boy is more magnetic than the last, but none as captivating as Reed Royal, the boy who is determined to send her back to the slums she came from.

Reed doesn’t want her. He says she doesn’t belong with the Royals.

Wealth. Excess. Deception. It’s like nothing Ella has ever experienced, and if she’s going to survive her time in the Royal palace, she’ll need to learn to issue her own Royal decrees.

This review will have spoilers! I don’t usually do spoilers but I cant help it this time !!

This series was recommended to me by one of my blog followers, they didn’t tell me what they thought about the series just that they wanted to know my true feelings about it. Well I’ll be brutally honest and just say I’m not a fan of this series, but to be fair it could be because I’m a 34 year old woman with a low bs tolerance. Its causing me anxiety just trying to rehash what I read but only because this series is angst after angst after angst, you get my drift…. Before I come off as a total ass I’ll say that the author Erin Watt did an amazing job keeping me caught in her series, because despite me not liking the actual content I wasn’t able to put the book down, I call that great writing.

Elle Harper starts off in book one as a very strong character who is stripping for a living….. Yep you heard me, she’s 17 years old and been on the pole since she was 15 to help pay for her mothers medical bills. I mean, I suppose its admirable what she did for the love of her mother but we’re lead to believe her mothers stolen ID card that says she’s 34 is believable when you’re 15 years old and stripping for a living. NO. Whatever, so as the story progresses Elle is saved by a guardian that she didn’t know existed and is brought into a world where money rules the world. In comes the Royal family…. Throughout the series Elle goes from strong, to antagonistic, to drama queen, to in love and calculating and later turns out to be normal..ish.  The one great quality about Elle is her loyalty to the ones she loves.

The Royal Family : Callum Royal- Dad/Guardian is very uninvolved in his family although he puts in minimal effort and seems to love all his children very much, he’s just very much lost in grief it seems. I can’t quite get a good read on him, he’s willing to buy his children out of trouble but not really willing to make them straighten up. He’s got likeable qualities.  Reed Royal- Reed is the leader of the Royal boys although he’s the second born. He’s an awful human being to Elle in the beginning since hes convinced she’s sleeping with his dad. Point blank and crudely put Reed is a dick of the worst kind. At one point Elle is secretly  shot up with a dose of Molly/Ecstasy and has sexual needs that wont go away, so Reed volunteers to take care of her since she is experiencing excruciating sexual pain from her unwanted dose of drugs. So he takes care of her without full intercourse and yet she is totally ok with this because the drugs went straight to her vag and she somehow has total control of her brain and wants this from Reed….

I just cant… Am I the only one left face palming ??? Anyways Reed also rules the prep school they attend and he makes sure to ruin her reputation at school as well. Eventually Reed falls in love with Elle and wants to become a new man. There is a Broadway production full of drama in between falling in love and Elle and Reed becoming a couple but I refuse to rehash the cluster that is their story. There are 4 other Royal brothers Gideon Royal, Easton Royal and twins Sawyer and Sebastian Royal. These 4 are all one big ball of wtf on their own so when I say this series isn’t short on drama just trust me.

I’m not big on sex scenes with teens, especially under a certain age but I’m a grown woman and am indeed currently wearing my big girl panties so obviously I know it happens but to read it made me feel dirty. So if you’re interested in that aspect then yes it has sexual moments in it over and over and over….. If you like rags to riches, bullies, drugs, fighting, teens having sex with adults, runaways, attempted murder, sexual assault, murder and lets not forget love then this is the series for you.

I gave the series 3.5 stars because the author did keep me reading even though I wanted to throw my kindle out the window while driving 70 mph down the highway, sorry its true. She has a way of weaving the story around you where you feel you’re caught in a web and cant get out of it because you need to know how it all ends. All I can say is if you decide to read this story be ready to not be able to put it down because you’ve never read a series quite like this…..

One thought on “|Review| The Royals Series by Erin Watt”